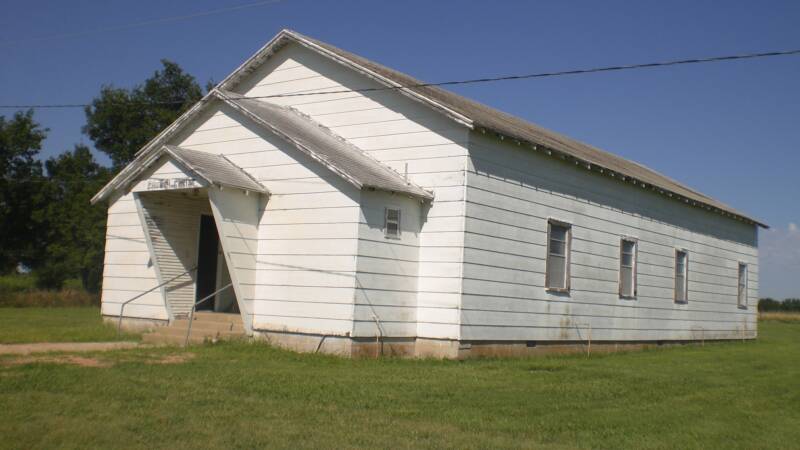 In Coal County
Restoration and repurposing was completed in the Summer of 2015.
The town of Kitty, located one mile north of present day Clarita, was the first settlement in the Clarita area. Early accounts tell of a Church Of Christ in the settlement of Kitty as early as 1906, when the O’Neal’s and Anders with their many grown children, moved from Missouri and settled there.
James Franklin O’Neal and his sons built a two story, red mercantile building and, according to an early newspaper the “Campbellite Church of Christ” met in the upper story. After statehood, the building was moved into Clarita and became the Woodmen of The World lodge.
When the railroad was built in 1909-10, a new town called Clarita, was laid out and building lots were sold. Coal County Warranty Deed Book 10 pages 294-295 says: Know by these present that John W. Hoffman of Muskogee, Oklahoma for the some of one dollar, grant, bargain, sell and convey unto L.M. O’Neal, John D. Baldwin and J.M. Anders, trustees for the Church of Christ, parties of the second part the real property and premises in Clarita, Oklahoma, lots 5 and 6 in block 81, with all improvements thereon and appurtenances thereto. Dated 18 May, 1910.
It is not known if the Church building had already been built when the lots were purchased. At that time there were already several businesses, a hotel, lumberyard, train station and several residences.
In the Clarita Enterprise of March 24, 1911, there was a directory of churches in Clarita and it mentioned “The Christian Church” with Reverend Rhea, Pastor. This was most surely the Church of Christ. Most of the early merchants of Clarita and many of the members of the Church Of Christ were related in some way to the O’Neals. Names of some of the families attending in the 1930’s were: Dillion Anders, Eugene Schmeltzer, L.M. O’Neal, G.W O’Neal, Odus O’Neal, Fred O’Neal, Ralph Stubblefield, Olin Stubblefield, Chris Stubblefield, Will Taylor, L.M. Rush, Julia Hudson, Eugene Woods, Jim Woods, Bill Robinson. Ruff Davis, Roy Walkup, Jep Hefley, George McMillian, and several Ray families, Most of these people were charter members of the Church.
When the church building was no longer in use, it was purchased by Winston and Linda Rice in 1989. The building is currently undergoing restoration. The building will have two small office rooms in the back. a large open room will be available for workshops and seminars. Historic artifacts, pictures and memorabilia will also be displayed.