General "Mule" Waveren
GENERAL WAYVERNE AND HIS MULE
(From an article in the Daily Oklahoman Sunday  Feb. 18, 1940)

His name is "General Waveren," no John, Joe, Sam or anything else as a preliminary encumbrance.  Just plain General.  And why shouldn't  it be?  Wasn't he one of Custer's general scouts.  Didn't the general of Little Big Horn fame virtually raise him? Didn't he lose that hand in a tussle with the Cheyenne the day after the massacre?

All this and more General Waveren will tell you if you seek him out in his cabin near Clarita in Coal county; or find him at the farm home of his good friend J.E. Collins.  He will be especially cordial if you show any interest in his mule, or rather the grave yard where his mule has been buried since November, 1928.  Some day the general is  going to be buried there, too, in perhaps as remarkable a cemetery as you'll find in Oklahoma.
General Wayverne is something of an institution in Coal county now.  He has been in and around there since 1905.  When he was a younger man they say he was as good a hand with an ax or saw as any one in the timber country.  For years he made a living sawing wood and doing odd jobs around the farm.  And all this with one arm.

But he doesn't do so much  now.  A man who will be 90 years old in March--even a man who has lived outdoors all his life, fought Indians and kept active and fit--can't swing an ax forever.

Instead of moldering into dust in a quiet Oklahoma pasture as General Wayverne insists he wishes to do, he might have been one of the immortals who  died with General George Custer in the Great Montana  massacre of June 25, 1876.  Wayverne is a little hazy on some details of his early life, but he has his dates and apparently his facts straight about that grimy epic chapter in United States history.

He was born March 4, 1850--he thinks--near a Crow Indian agency in Montana.  His father was a full blood Sioux and his mother a half breed Sioux.  That much he is sure of, but not much else so far as family ties are concerned.  His parents deserted him when he was an infant and somehow he managed to survive in spite of the indifferent care he got in the Indian camps of the tough northwest.

His Indian blood wasn't enough to tie his loyalty to the tribes and when he was old enough to think for himself, and he cast lot with the whites and began fighting Indians in earnest.  There were plenty to fight in Montana in those days.
General Mule's cabin was saved from certain deterioration by W.M. "Mouse" Basket who had the foresight to preserve it by putting a new roof on it, moving it to a safe location and blocking it high off the ground nearly 30 years ago. Winston Rice has plans of bringing the historic building to Clarita for complete restoration.
Just when General Waveren first met Custer isn't in the records.  Probably it was the summer of 1874 when Custer headed a military guard sent with a party of scientists making explorations in the Black Hills of North Dakota.  Wayverne's skill as a plainsman and his knowledge of Indians stood him in  good stead when, a few years earlier, he joined the army as a scout.
He cottoned to Custer immediately, and was with the General constantly.  He says Custer took a liking to him, too, and reposed implicit faith in him.  It was from Custer, he says, he got the designation of "United States Scout No. 1, Company M, Seventh Calvary."
Most  school boys know the story of the Custer massacre.  The Indians were getting out  of hand and numerous tribes were uniting against the whites.  In the spring of 1876 General Sheridan, commandant at Fort Riley, Kansas., made ready for a decisive blow against them.  Three columns under Crook, Terry and Gibbon were sent to crush Chief Sitting Bull, who was somewhere on the Yellowstone river.
Custer and Waveren were under Terry's command, Custer heading a Calvary regiment of 600 men.  Terry sent Custer and his command on ahead to bar the escape of the Indians to the east, with orders to wait for the main body of troops  under Terry and Gibbon.   The rendezvous was to be the junction of the  Little Horn and Big Horn rivers on June 26. 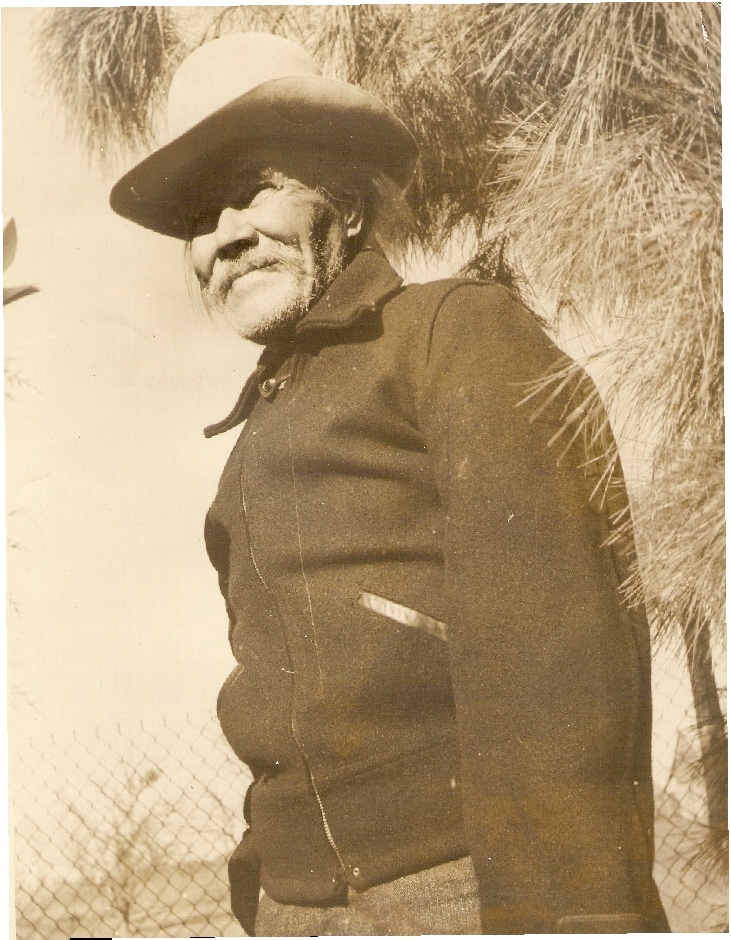 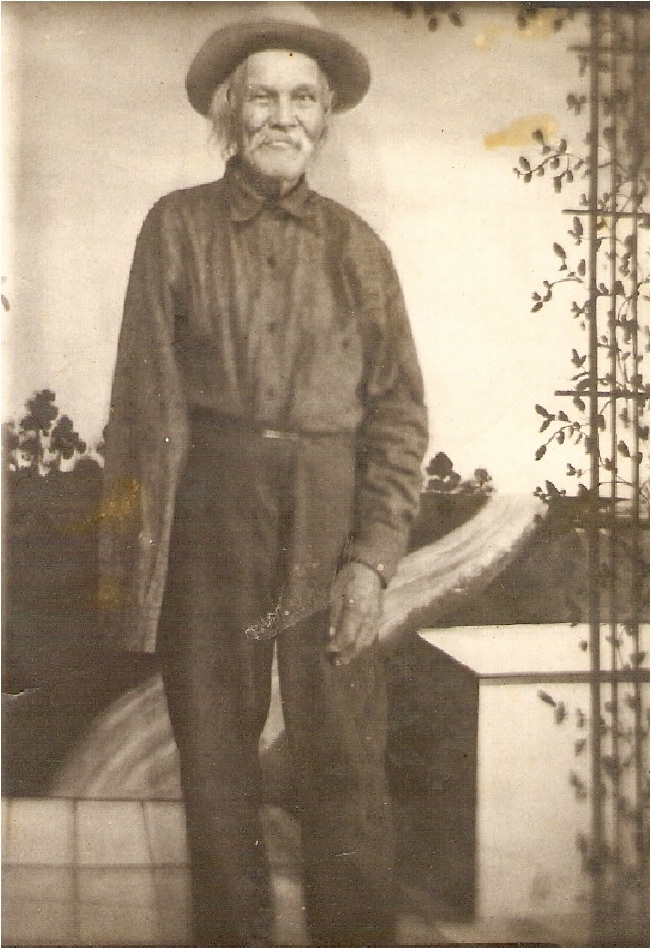 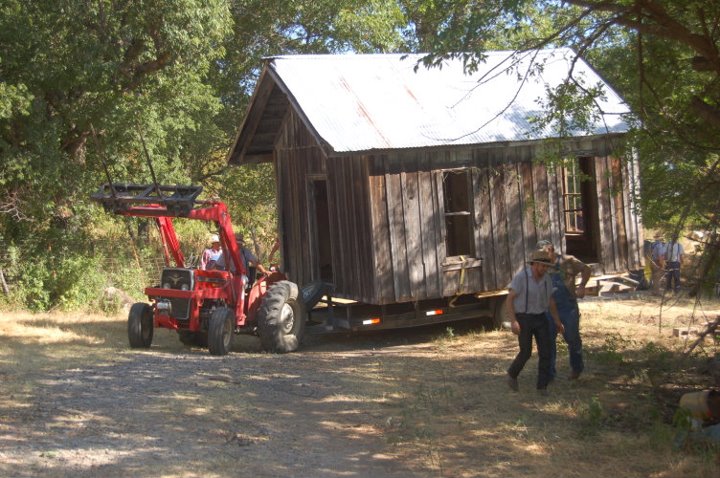 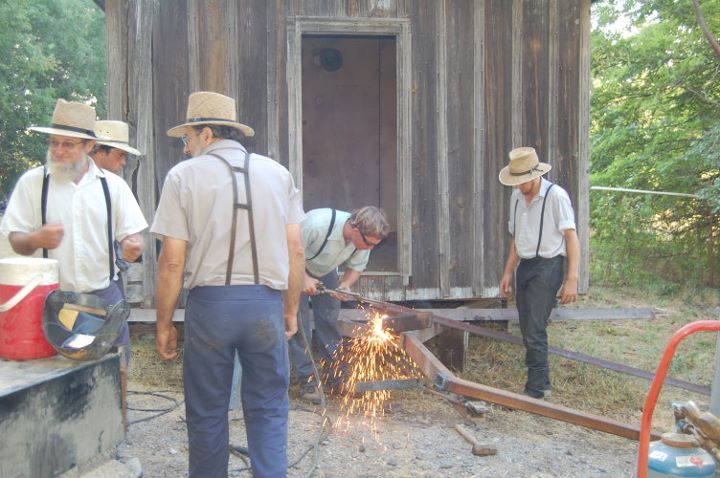 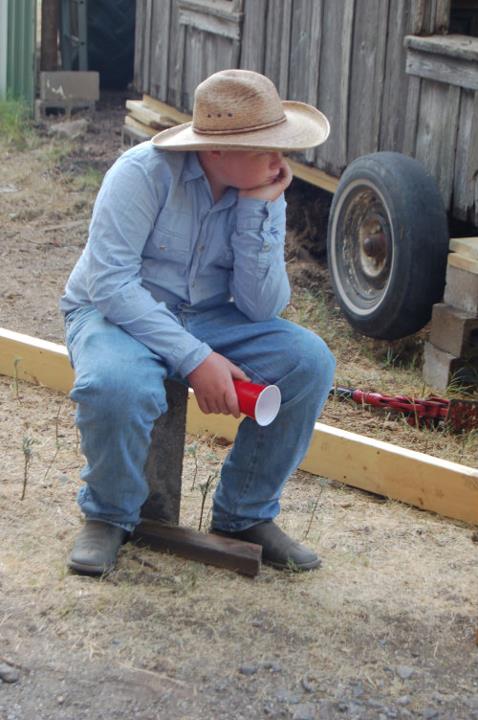 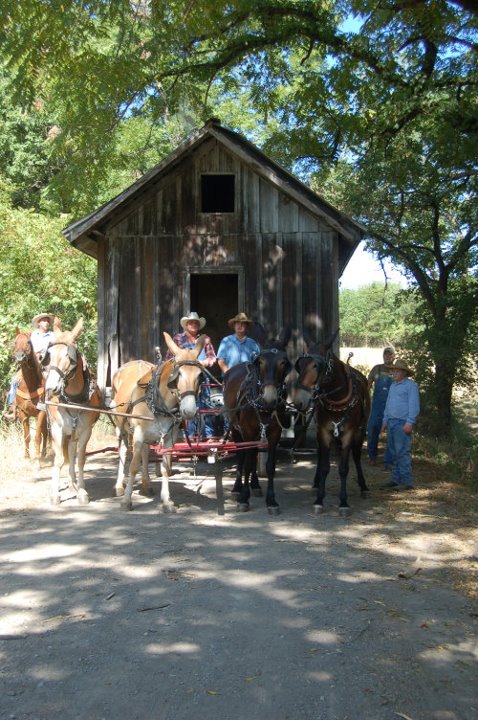 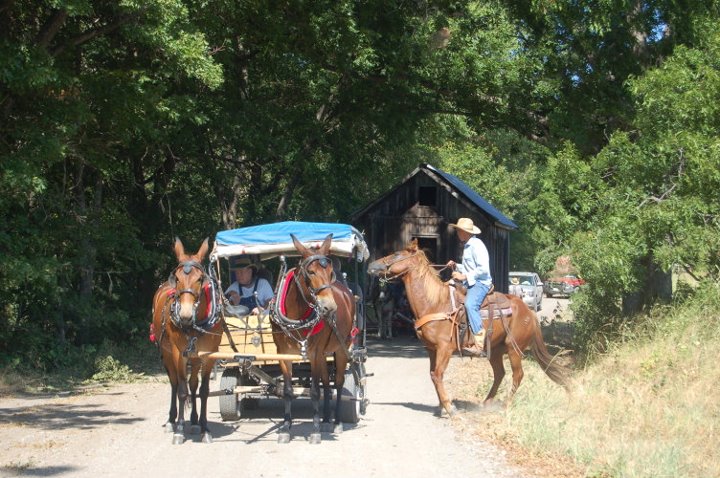 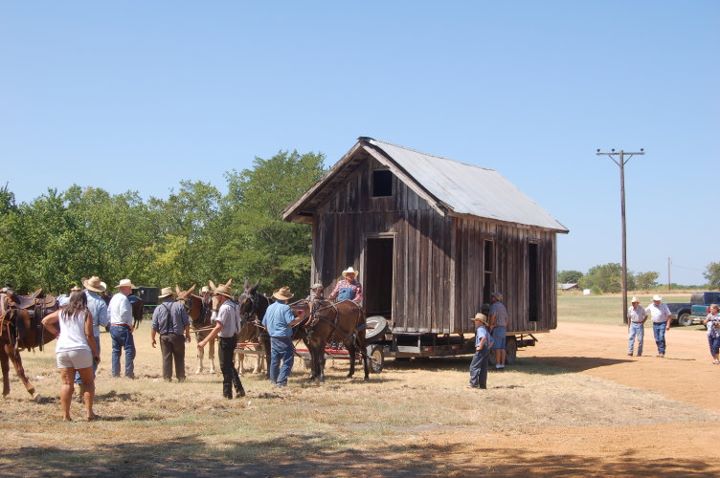 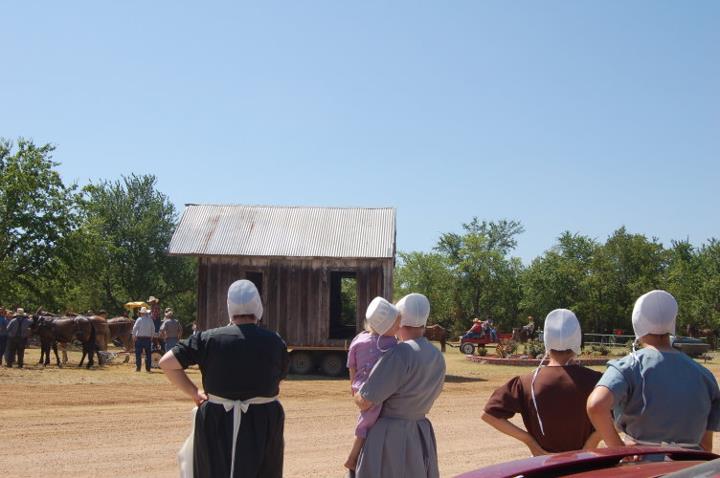 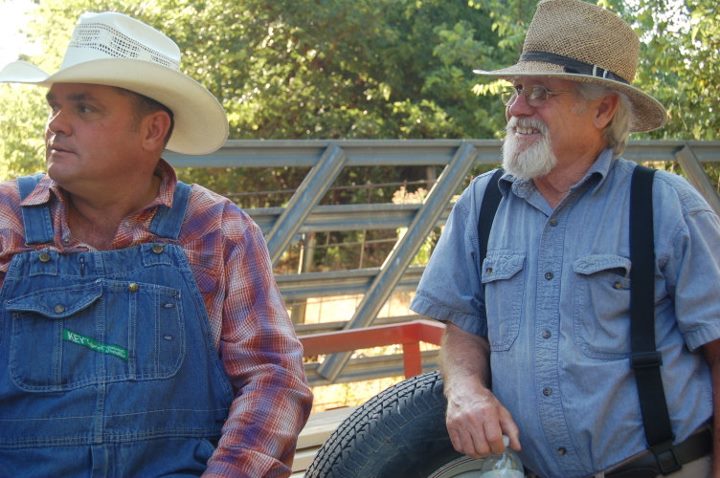 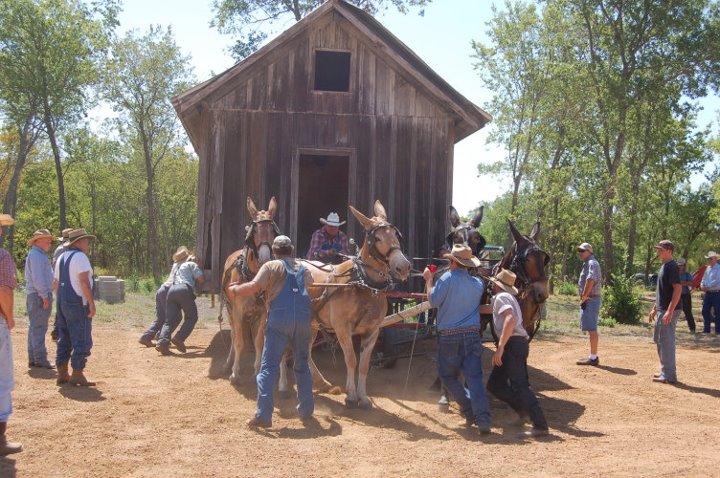 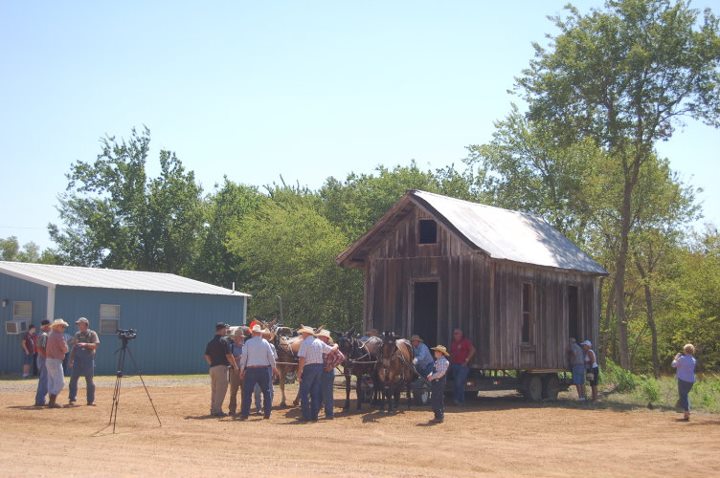 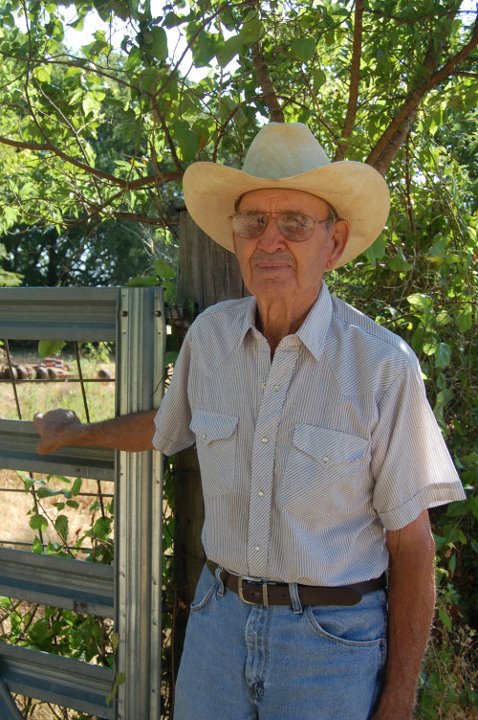 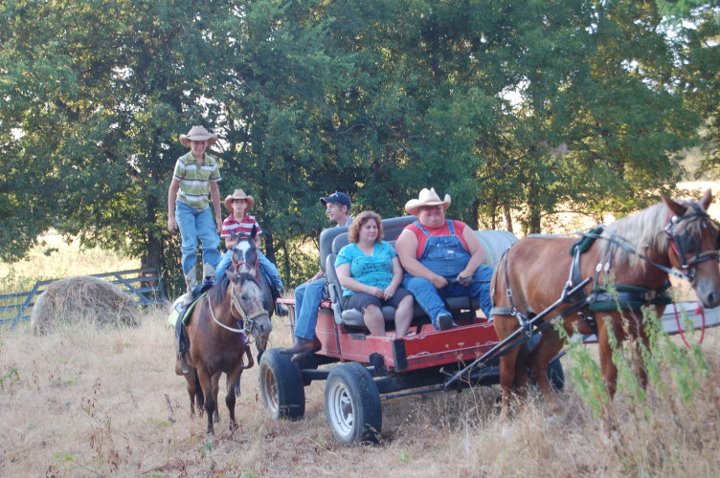 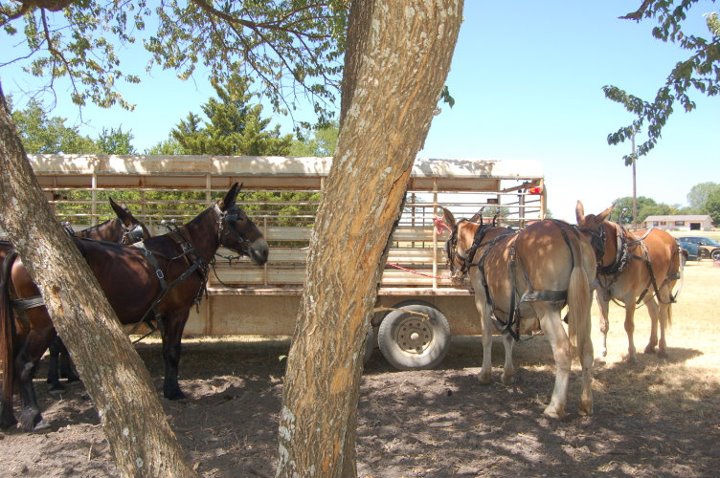 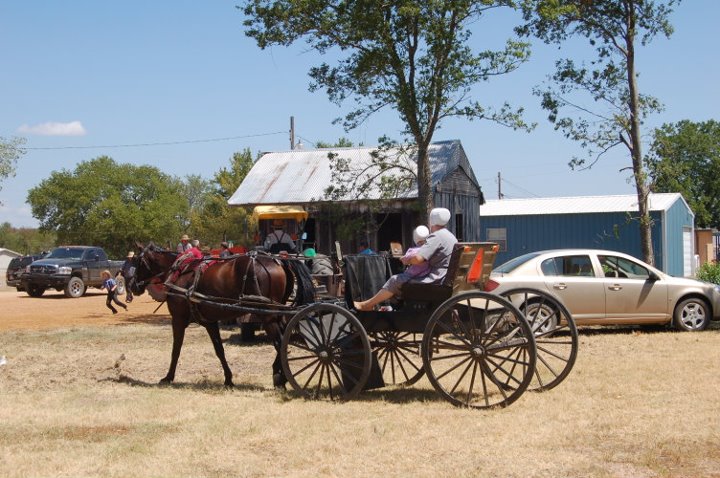 Preparing the transportation.
Moving the cabin from where it has set since the mid 50s.
Wartching and waiting.
W.M. "Mouse" Basket
Hitched and ready to roll.
Spectators came out of the woodwork.
Escort and traffic control.
Arriving at Grigsby Park in Clarita.
Observers from Velma's Kitchen take a break to watch.
Danny Bullard backs the cabin to its final resting place.
The event was documented by Bernie and Aaron Blue
Danny Bullard and Win Rice discuss what a day it was.
"Yea, what a day".
Let's go to the house.
In Coal County